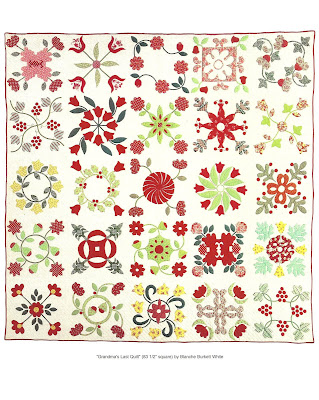 The first time I saw this design was in a book published in 2000 by Chitra Publications. Grandma’s Last Quilt. Loving applique and antique album quilts I immediately fell in love with the quilt. January 2001 I was a member of a group, Tucson Applique Stitchers, a chapter of The Applique Society.  Our annual focus was to create a quilt to donate to a worthy cause. A fellow member suggested we make this quilt. Also at the time Laurene Sinema’s line of fabric “1850’s Legacies & Beyond” was on the market. 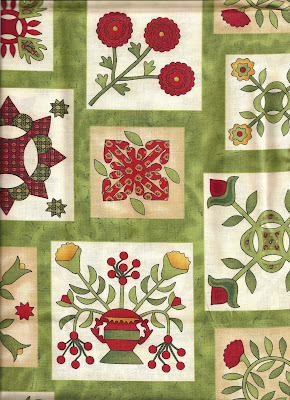 Laurene Sinema’s line of fabric “1850’s Legacies & Beyond”
Laurene Sinema (June 22, 1929 - November 23, 2003) an inductee in the Arizona Quilters Hall of Fame had a huge influence on Arizona appliquers and quilters. Laurene was fighting her battle with cancer and the TAS decided we would use her fabric in the quilt as a tribute to her.
Twenty-five members of the TAS worked many hours to hand applique and hand quilt the Album Quilt. In November 2003 the quilt was raffled and proceeds were donated to Quilt for a Cause. 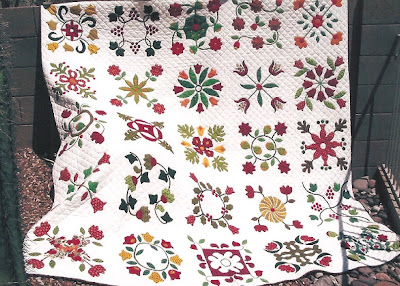 Quilt for a Cause Quilt
The winner of the quilt donated the quilt back to Quilt for a Cause for their 2006 auction. The quilt was entered in multiple quilt shows, including the International Quilt Show in Houston where it won a third place ribbon.
But the story for me does not end there. And no I did not win the quilt at the 2006 auction. But I can assure you it has a great new home where it is loved and adored.

While cruising a Phoenix antique store in 2006, I found the following advertisement for the Country Gentlewoman magazine dated 1941. 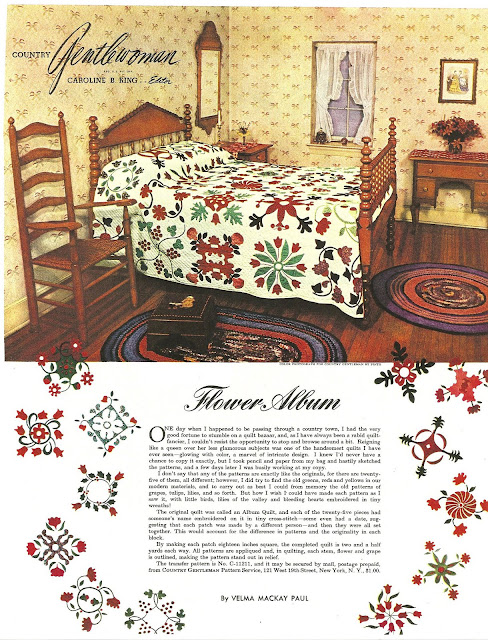 Of course I recognized it immediately as the Album Quilt the TAS had made. The advertisement says you can order a transfer pattern for $1.00. I am still trying to find out more information about this pattern. It is almost impossible to find past records from magazines from that time period. I was happy to have the original page from the magazine to add to my ephemera.

March 2008 the following quilt was on eBay, I knew I had to have it.

The eBay quilt had the exact same blocks as Grandma’s Last Quilt. I noticed the placements of the blocks were different. But when I looked at the ad from the Country Gentlewoman clearly the first three rows that run head to foot are the same block placement as my quilt. I was excited to own such a wonderful quilt. 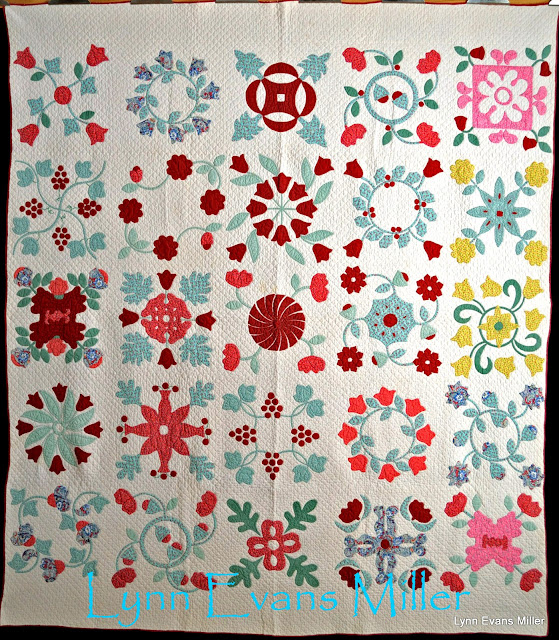 Other sightings of this design:
In the book Minnesota Quilts (2005)  on page 118 is a quilt called Sampler Quilt. They are the exact same 25 blocks. At first glance the layout looked different. But then I noticed if I looked at the mirror image of the Minnesota Sampler Quilt it does have the same exact layout as my quilt. 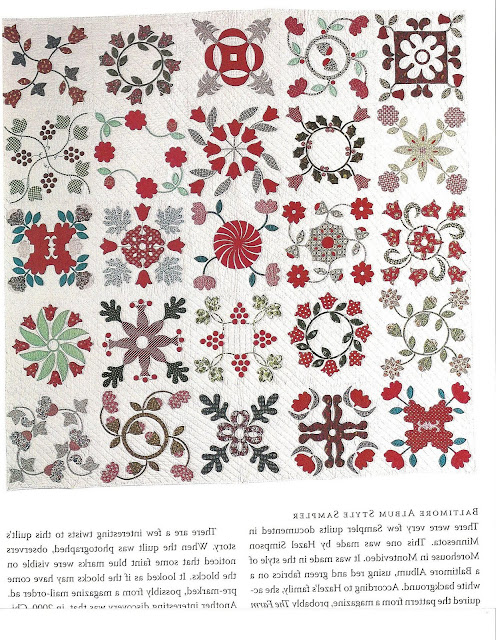 I might guess the slide picture of the quilt was backwards when published. I would like to know.
In October 2008 I attended my first AQSG Seminar in Columbus, Ohio. I purchased a book from the silent auction. It is a small catalog of quilts from The Denver Art Museum (1974). A black and white picture of a quilt they call the Bride’s Quilt was pictured. I wrote right away to see if I could obtain a color picture. Found out it was published in a Japanese book American Patchwork Quilt-The Denver Art Museum (1986).  The DAM quilt was made and gifted to the museum by Charlotte Jane Whitehill. Whitehill dates her quilt 1945 and attributes the pattern given to her by Hazel Cline Lennartson. Information from DAM adds:
“The Lennartson family pattern, probably a copy of one of the Lennartson brides’ quilts with each square donated by a friend of the bride."
The DAM quilt has all 25 blocks and the layout is almost perfect match with my quilt if you do a mirror image. There are two blocks in the DAM quilt that are in a different location. Top row fourth block and third row second block are switched. Again could the slide have been put in backwards? Question for further study. 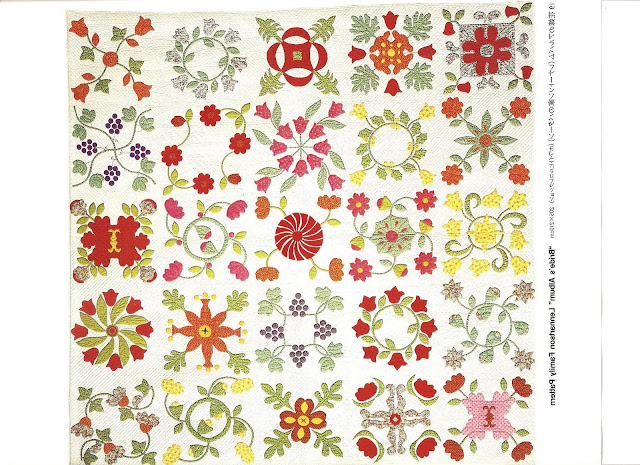 Came across another quilt with 12 of the 25 blocks.  This is in a book called American Beauties: Rose and Tulip Quilts (1988). The authors say:

“These 12 blocks and 13 others were first published by Country Gentleman in 1941 in an article about a sampler quilt from 1850. Around 1945, Charlotte Jane Whitehill used all of the patterns in her famous BRIDE’S QUILT, now in the Denver Art Museum.”

So Gwen Marston and Joe Cunningham, the authors, in 1988 had some piece of information that said Charlotte Jane Whitehill used the patterns? Or did they assume she used the patterns because of the dates?
They also refer to an article in Country Gentleman about a sampler quilt from 1850. The ad I have says Country Gentlewoman. I need to find out if there was such an article in the Country Gentleman. This quilt can now be seen on The Quilt Index.  This is where my research ends for now.
If you have any information on this pattern I’d love to hear from you.
Posted by Lynn at 5:17 PM