Emma Andres Quilts and Her Happiness Museum -- Part 1 of 3

This article is based on in-person interviews in April 1980 and June 1981 and numerous phone calls over the two year period as well as Miss Andres' scrapbooks.

Emma Andres owns the Happiness Museum in Prescott, Ariz. She was a "fine" quiltmaker whose quilts show imagination and originality as well as fine technique. To JOURNAL readers she is better known as the generous friend who loaned us scrapbooks she kept, filled with mementos and correspondence from her friends Florence Peto, Bertha Stenge, Carrie Hall, and "Dad" Pratt.

Emma Mary Martha Andres was born August 18, 1902 in Prescott, AZ which was ten years before Arizona became a state. One can spell "Emma" using the initials of her names. 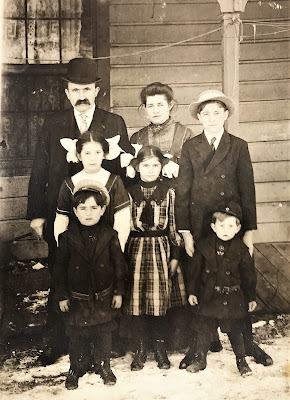 Emma’s mother, Anna, was born in Central City, Colorado.
Her father, Matt(hew) was born in Alsace-Lorraine but came to Colorado as a young boy. Her parents were married in Central City and settled down to raise their family. Emma was the middle child with a sister who is now Sister Anna Marcella in the St.
Joseph order in Los Angeles and three brothers who are all dead. Emma's sister was more studious as a child than Emma and Emma enjoyed the choir at Sacred Heart Church.

Matt Andres had a small cigar store in the small town of Central City for many years before they moved to Prescott in 1902 (the year Emma was born). 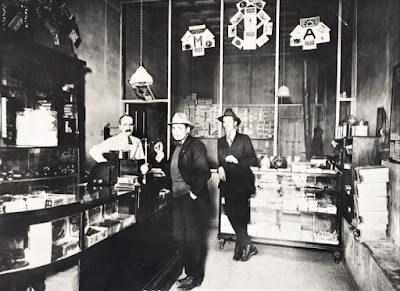 Mr. Andres saved 2,000 metal tobacco tags as premiums for a fancy baby carriage for his new baby and Emma still has several of the metal tags in her museum as well as the premium book with a picture of the carriage.

Emma attended catholic school for the first grades and then decided she wanted to attend public school. She is now sorry her parents allowed her to change because she thinks she missed some of the religious education that would have been of benefit to her.

Mr. Andres wanted to get out of the tobacco business so he took the family to Clearadon on the Texas panhandle and spent two years there before moving back to Prescott.

Emma went back to public school and the family moved into a small house which is still standing. 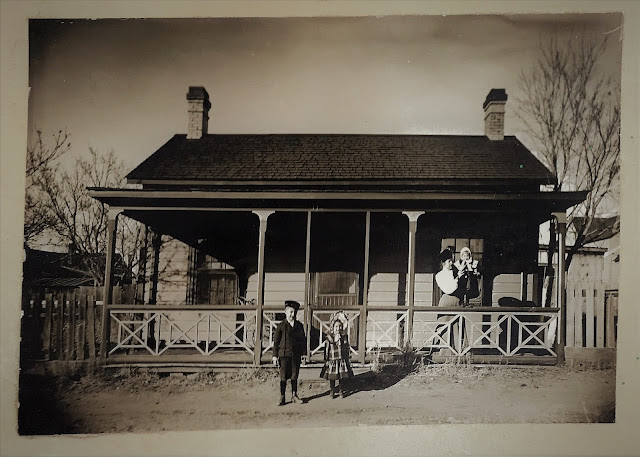 Her father built a small building in the back of the lot where he made cigars. During this period she learned to strip the tobacco leaves from the stems and became adept at banding the cigars. Emma says she didn't realize how difficult it was to make.

In 1919 Matt Andres decided business was sufficiently good so that he could open a cigar store. He rented a small store on North Cortez in downtown Prescott where there was more traffic. "Now," Emma says with her dry humor, "You could shoot off a gun up the street after 3 p.m. and not hit a soul!"

Emma recalls there were often one or two other cigar makers in town but they didn't last long. In the back of the small store there is a large room which is now used for storage but was then the production center.
According to Emma, in Mr. Andres' heyday production ran about 7,000 or 8,000 cigars a month. He delivered the cigars every month by horseback or horse and buggy to most of the mines in the area.  He even went to Jerome, now a ghost town, but then a thriving mining town perched on the side of a mountain 5100 feet above sea level and 35 miles distant. He stocked cigars and candy in the big display cases which house the thousands of items in Emma's Happiness Museum.
Emma began working full time in the cigar store after graduating from Prescott High in 1921. When her father retired in 1929 because of ill health she tried to keep the business going. She sold papers and magazines and finally turned to selling religious mementoes.

After seeing a quilt at the County Fair in 1931 she began her first quilt. She chose an applique Tiger Lily kit purchased from an advertisement in Jan 1931 WOMAN'S WORLD. 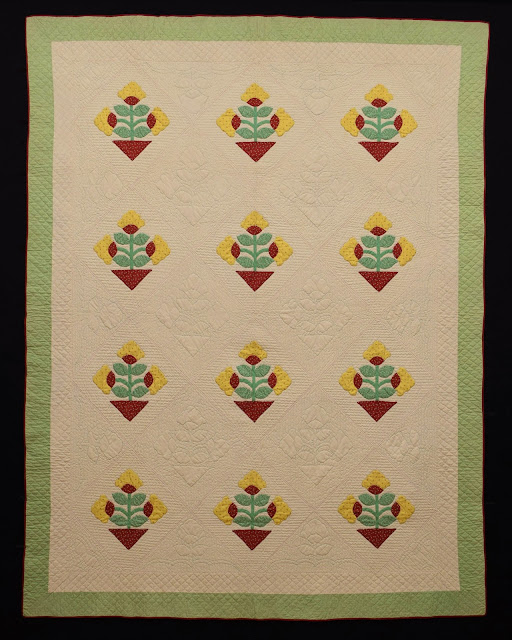 She did all of her quilting on her lap until 1933 when she purchased a small quilting hoop from Stearns & Foster. The date is verified by a letter carefully taped in a scrapbook from the company thanking her for her order. The metal hoop with an expandable rim allows the quilt to be held firmly. It has the original label on it and occupies a place of honor on top of one of her quilts in the museum. The first quilt she quilted in it was a stuffed quilt, pink on one side and blue on the other. From her first quilt she was determined to use a lot of quilting –a vow she has diligently kept.