Emma Andres Quilts and Her Happiness Museum -- Part 2 of 3

Emma Andres Quilts and Her Happiness Museum -- Part 2 of 3

Emma Andres owns the Happiness Museum in Prescott, Ariz. She was a "fine" quiltmaker whose quilts show imagination and originality as well as fine technique. To JOURNAL readers she is better known as the generous friend who loaned us scrapbooks she kept, filled with mementos and correspondence from her friends Florence Peto, Bertha Stenge, Carrie Hall, and "Dad" Pratt.
This article is based on in-person interviews in April 1980 and June 1981 and numerous phone calls over the two year period as well as Miss Andres' scrapbooks.

Written by Joyce Gross
Published in her Quilters' Journal,  Volume 4, No 2, Summer 1981

About the time Emma finished her first quilt, she read a newspaper story about a Charles Pratt who pieced picture "quilts" (they were technically not quilts because they had no backs and were not quilted) of tiny silken squares and won many awards. His masterpiece, The Ninety and Nine pictures the Good Shepherd holding the strayed lamb and so fascinated Emma she wanted to write to him but she had no address.

In 1939 after seeing an announcement in McCALL'S NEEDLECRAFT about Florence Peto, Miss Andres wrote to Mrs. Peto in care of the magazine. The letter was forwarded to Mrs. Peto who answered promptly thereby beginning a fascinating correspondence between the two women which lasted until Mrs. Peto's death in 1970. They met only once when Emma was visiting a sister-in-law in Chester, N. J. and discovered how close she was to her good friend.  Emma remembers it to be about 1956

One day Miss Andres was reading one of the out of town papers she sold in the store and there in the July 21, 1940 PHILADELPHIA INQUIRER Rotogravure section was an article about the long-lost Charles Pratt with pictures and his address. 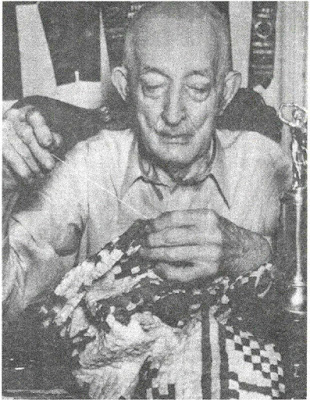 Emma was jubilant and quickly wrote a letter to him. He answered promptly and until his death in April 1941 letters went back and forth. She grew to call him "Dad" and though she knew him only a short time he had a pro- found influence on Emma Andres' life.

Emma says, "He changed my life."

When Emma found Charles Pratt's address she shared it with her friend Florence Peto who was also looking for him because of her long interest in men quilters. Mrs. Peto wrote on Oct 8, 1940, "What a smart girl you are!... When I was in Pennsylvania looking for him I  had nothing  to go by except that Mrs. Carrie Hall had said he was a Pennsylvania man who had  taken  many many prizes."

Mrs. Peto wrote to him and was rewarded with an offer to loan her some of his quilts for her lectures and from that time on she tried to hang his The Ninety and Nine quilt whenever she lectured. 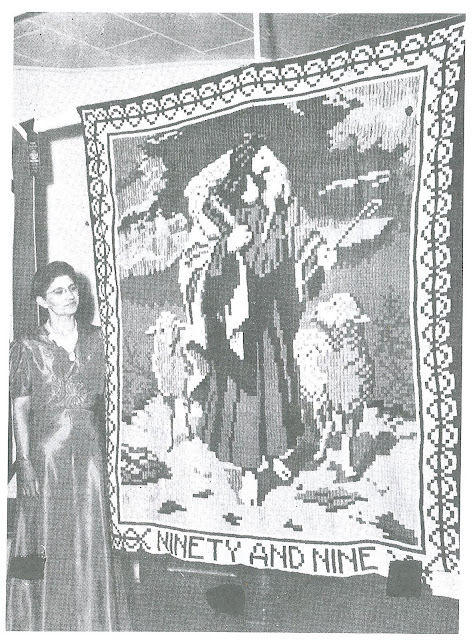 When Emma first saw the picture of Mr. Pratt's picture quilt she wanted to try her own version of the technique.

The result was her Silhouette or Lady at the Spinning Wheel.  She found a cross stitch pattern for the "Lady" and substituted red squares for the "cross stitch" and added a cat. It was made of 3500 red and white squares and won a Sears merit award in 1933 at the Chicago World's Fair. 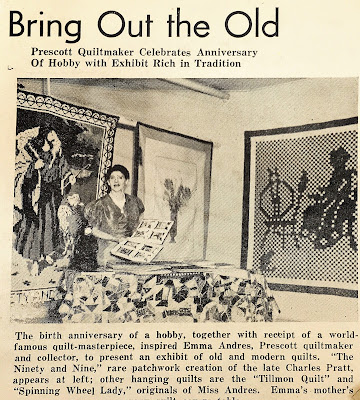 Mrs. Peto noticed the similarity between Emma's Silhouette and Mr. Pratt's and commented on it in a letter dated Oct 8, 1940: "I am much interested in the technique of his (Dad Pratt's) pictured quilt - Penn's Treaty

Apparently all made in small squares - silhouette style. It reminds me of your own girl, cat, and spinning wheel. The photo is small but it appears to me to be made like that - in squares. I cannot remember having ever seen an old quilt made that way and I am wondering if such silhouette pictures in patchwork isn't modern." 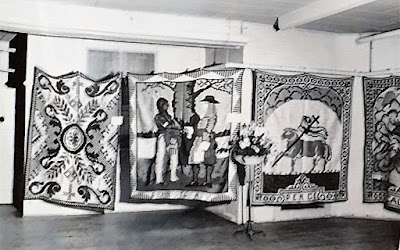 In April 1942 when Mr. Pratt died at the age of 89, his daughter Mrs. Bertha Burd, gave Emma four of his "quilts". Included was the one on which he was working at the time of his death.

It still has his needle in it. She also gave Florence Peto the two which Mr. Pratt had loaned her. So the The Ninety and  Nine  continued  to  go  with  Mrs. Peto  to her many lectures and now belongs to a granddaughter.  Ruth & Naomi is in a private collection in Kentucky.

Emma's "quilts" are permanent residents of her Museum except for brief excursions to her quilt shows. They have all been exhibited in her windows.

On Dec 17, 1940 Mrs. Peto wrote to Emma, (Mr. Pratt) "has written me he would like to have me put on some kind of a show which could exhibit all of his quilts at once I may try to (get the Red Cross or British War Relief) get up an exhibition of these unusual pieces and charge an admission with the proceeds to go to the organization... 1 think that is what our old friend has in mind." She wrote twice more about the idea but apparently never carried it out. 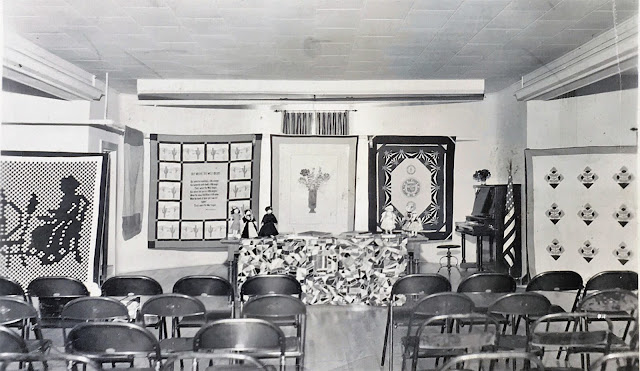 A notation in Emma's handwriting on the back of a photograph places the date of her "first quilt show at Sacred Heart Church, Prescott, Arizona, 1941"

The quilts were all made by her. On Oct 18, 1941 Mrs. Peto wrote "Watched for your letter to tell me about the Quilt Exhibition and lecture and how it went. Sorry you were disappointed in the attendance but that is the way it goes sometimes ... If you came out of your venture making some money, you can be satisfied; it is quite an ambitious program for you to swing it all alone without the backing of a club
... Perhaps you will have blazed the trail and prepared the public mind (of Prescott) and the next attempt will be better attended and therefore more successful.  It sounds as if you covered a lot of ground in your quilt talk and as I reread your letter your audience certainly got their 50¢ worth."

For her 1942 quilt exhibit, Emma borrowed Charles Pratt's Ninety and Nine from Mrs. Peto. She had always admired it in photographs but she was so thrilled with it when she saw the actual quilt, she took a pattern from it and later reproduced it. Her quilt is made of cotton in 11/2" squares while Mr.  Pratt's is in 3/4" silk squares.

In 1943 to "celebrate" the 2nd anniversary of Mr. Pratt's death, Emma arranged a display of Calvary quilt for an Easter Needlework display and in August of the same year had all of the Pratt quilts she owned were exhibited. On Oct 1, 1943 Mrs. Peto wrote to her friend, "I'm glad you gave another successful party; it often happens that 'voluntary contribution' yields more than a ticket-buying venture." 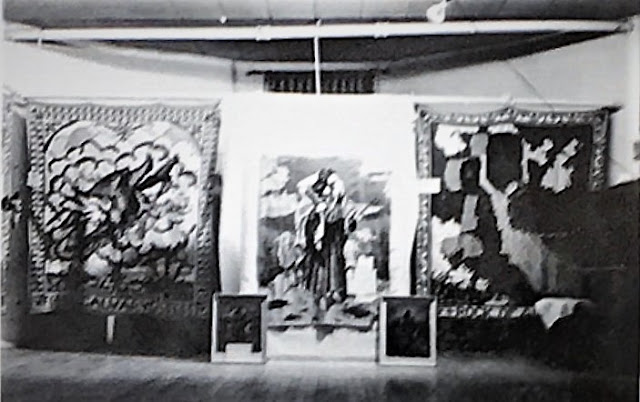 In the ARIZONA REPUBLIC of April 14, 1946 is an article entitled, "Quilt exhibit due in Prescott". "Miss Emma Andres, nationally known for her needlecraft ability will present her sixth exhibit of quilts tomorrow afternoon in the Sacred Heart Hall. She will lecture concerning the displays at 3 p.m. and 8 p.m.
Each year these needlecraft shows have been a memorial benefit to such organizations as the American Red Cross, Boys' Town, and the Community Hospital.