Emma Andres Quilts and Her Happiness Museum -- Part 3 of 3 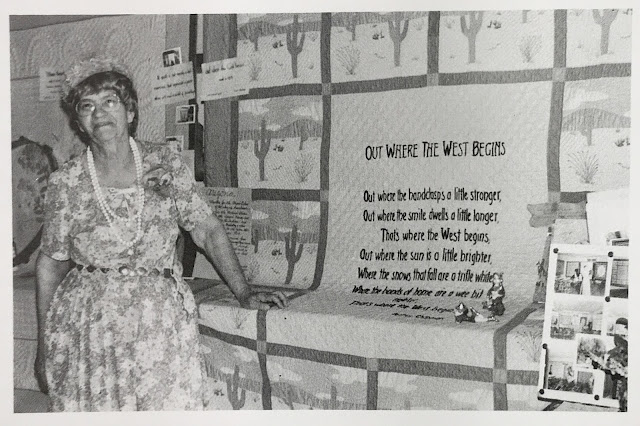 Emma's quilt Out Where The West Begins  is an original design based on a poem written by Arthur Chapman. The poem in chain stitch script is the medallion surrounded by 14 blocks picturing a desert scene with Ocotillo  (pronounced Ok-a-te-yo) a type of cactus. 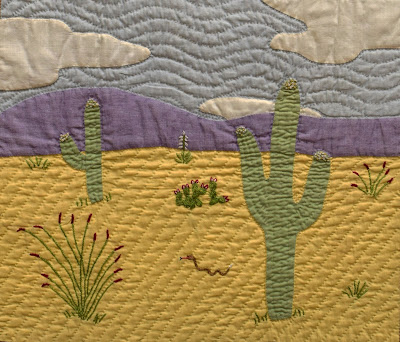 Emma was not pleased with the way the Ocotillo looked and persuaded a water colorist whom she met to make some suggestions and paint one for her. She then practiced painting them until she was satisfied with the results. 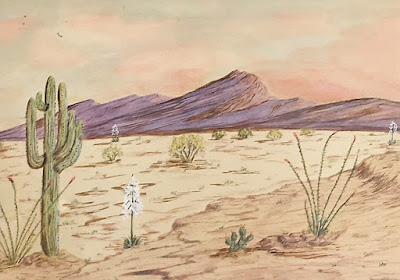 This led to another artistic endeavor. She began making miniature watercolors which she framed and sold for 50¢. For a short time she took singing lessons as well as painting lessons but gave them both up.

The little miniatures, which Emma called "accidentals" were popular and she netted $1,000 from their sale. She painted similar scenes on taffeta ribbons.

One of her most enthusiastic customers was Florence Peto. She had sent two "accidentals" to Mrs. Peto for a Christmas present the first year of their correspondence and Mrs. Peto wrote to her on Dec 27, 1940 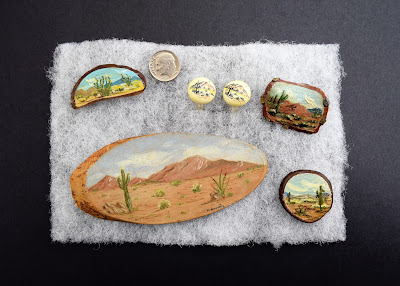 "Those darling miniatures! I don't see how you indicate so much on such a small area. And the precious tiny frames.  When you wrote once before about finishing some
miniature frames I visualized frames about the size of daguerreotypes - I've never seen such wee things." On April 7, 1941 she again wrote, "Incidentally (a lady) fell in love with your miniatures which stand on my living room mantle. For that matter I cannot tell you how many people have admired the dear little things... The canyon looks... truly lovely." On Oct 18 1940, "The little miniatures have just arrived and Marjory (Mrs. Peto's daughter) and I are delighted with them. I don't see how you get all that distance, that perspective in such a tiny space. Mrs. Peto evidently ordered the miniatures as gifts for some friends. Emma says, "I like to work with small things. The miniatures are my favorites."

On Nov 22, 1941 Maude Longwell, a reporter for the ARIZONA FARMER wrote in her column "Fair Glimpses", "As usual Emma Andres newest quilt creation sent down to the Domestic Arts dept. from Prescott led all the rest. She calls it The Tiliman Quilt after a Negro couple who gave her the bouquet that inspired the motif - an appliqued flower and vase arrangement with the flowers done yo-yo style. You never saw anything to surpass the beauty of its quilted pattern and supreme delicacy of its stitching." 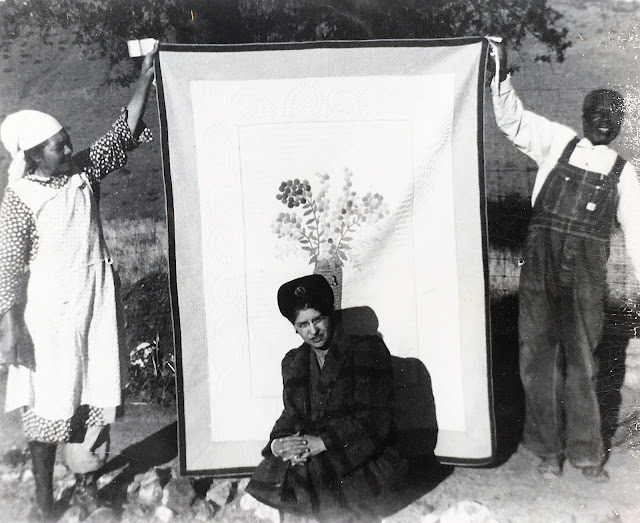 On Nov 22, 1942 the same reporter did a full page story for the EVERY WEEK magazine – a supplement to many Sunday papers. It was entitled, "Masterpieces in Patchwork" and featured "Miss Emma Andres and her quilt hobby".
"Emma has made about 15 quilts but is fondest of her four originals –

the Silhouette, Great Seal of Arizona, Out Where the West Begins, and the Tillman quilt. All prize winners. She is convinced that if you piece or applique a quilt, you should quilt it, 'I hired the quilting done on one of my quilts and I never did feel as though it belonged to me. In fact, I gave it away.' Her quilting - those intricate designs worked out with geometric precision and artistic flourish - is accomplished on a round hoop scarcely larger than an embroidery hoop." 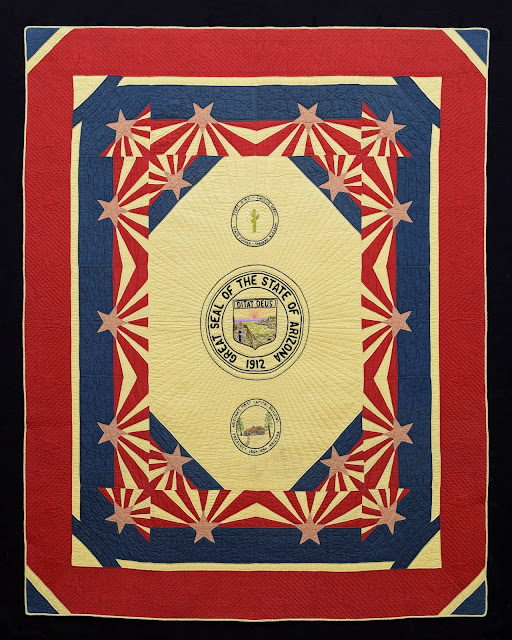 Mrs. Peto wrote several times asking for a picture of the Seal of Arizona quilt, mentioning that she would like to include it in an article for some magazine.  She approached WOMAN’S DAY with it, but they did not use it. The seal, letters, log cabin and yucca are all in chain stitch. 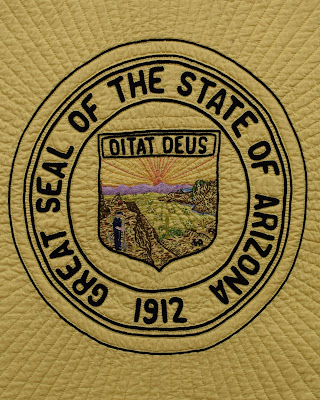 Emma appliqued the seal first and then attached it to the quilt. It wasn't large enough so she had to put it on a circle one inch   larger, cut out the extra material and reapplique it onto the quilt.

When she came to the state flags the corners seemed weak so she cut four flags apart to make the corners more important. 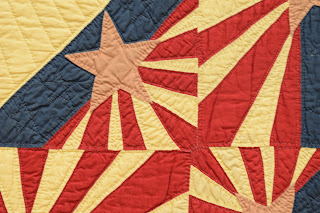 Emma had a unique method of basting a quilt together. She put paper down to cover the floor and then basted diagonally through to the paper. She could hear the needle hit the paper when she went through the three layers.

In 1968 her sister was celebrating her anniversary as a nun. As Emma couldn't get to Los Angeles to be with her, she decided to decorate the store window in honor of the event, using a nun doll as the focal point. She took a picture and sent it to her sister. That was the beginning of the decorated windows which she continues to decorate and change about every six weeks.

In an article in WESTWARD, March 10, 1978 she  is quoted, "The windows are a little stage of their  own. I feel I am deeply inspired. They don't amount to a dern (a favorite swear word of Emma's) but they have a lot of love in them. I try to keep them simple and childlike ... Sometimes I get discouraged and wonder why am I doing this. Then I say, ' Oh that's the devil talking' ...I'm sharing."

Items for the window displays are drawn from the museum. Sometimes she puts in one of "Dad" Pratt's faded and frayed quilts because "he wanted his quilts to be shared and enjoyed". Christmas, Easter and other holidays are always celebrated with special windows

Another of Emma's favorite correspondents was Carrie Hall, co-author of THE ROMANCE OF THE PATCHWORK QUILT IN AMERICA. Her scrapbook begins with a letter dated Jan 5, 1955. 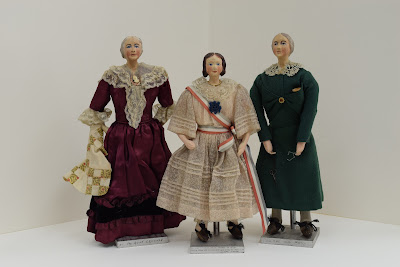 During this period "Madame" Hall lived in Northe Platte, Nebraska and sold dolls which she dressed to represent famous people. Emma asked Mrs. Hall to dress a doll as a nun to represent her sister. Now she has a

Both Mrs. Peto and Mrs. Hall remarked many times about Miss Andres' thoughtfulness.

Each correspondent had his/her own special scrapbook with everything taped very carefully in it. Mrs. Peto's is contained in three scrapbooks and Mrs. Hall's in one.

One of her prized possessions is her mother's scrapbook filled with political cartoons, newspaper columns etc. As a child Emma used her crayons to "color" the black and white pictures. She felt they needed something to brighten them up.

She has gradually replaced the items of her father's cigar store where she spent so many years helping him, with her own items that have brought her so much happiness – the dolls made by Carrie Hall, a large thimble collection, the catalog of prizes from the chewing tobacco company, "Dad" Pratt's quilts and her own fine quilts.

Emma doesn't keep regular hours in the museum but goes in almost every day. In some ways it is more home to her than where she sleeps. She welcomes guests, has them sign her register, and gives them little lectures about the treasures the museum holds. Each quilt and artifact has a story. Even if the guests don't always understand the significance or importance of each item, they sense Emma's involvement and how much it all means to her. There is no record of the date she took her last quilting stitch in her Ninety and Nine but she retired her quilting thimble by placing it in her glass case. She hasn't done any quilting since. When we interviewed her in June 1981 she remarked, "quilting is not part of my life now, but most of the wonderful things that have happened to me are somehow connected to quilting." A notation in Emma's handwriting sums it up, "I am deeply grateful for my thrilling experiences."
Since we last saw Emma we have had several phone conversations and a few letters. We understand that a quilting group in Prescott asked her to speak and thirty quiltmakers turned out for the occasion. She wrote "my little talk for the Hill Top Quilters Guild was fun." She has been rereading her old scrapbooks and has reestablished contact with some of the families of her former friends. Somehow we think maybe quilting will again be part of her life.

She was found again in 1987 by the Arizona Quilt Documentation Project. Her and her quilts were featured in the book Grand Endeavors: Vintage Arizona Quilts and Their Makers.  In the near future I will be sharing more about Emma and her quilts. Including notes, letters and correspondence from some of her dear friends.